Truly beyond the crossroads now…

One of the first serious discussions of Bermudian politics and society that I ever read was the 1993 book by Barbara Harries Hunter ‘Beyond the Crossroads – The People of Bermuda’.

I’d be lying if I remember much about it now, although I believe it was discussing how Bermuda in the 1990s was at a political, social and economic crossroads, hence the name.

Today, Bermudian politics – and economics/society at that – no longer seems to be at a crossroads.  Rather, it seems to have gone down a dead-end and doesn’t know how to get out of it. 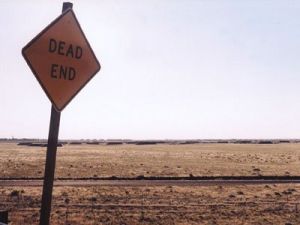 To me, we increasingly have two political parties which are unfit to govern at this moment in time.

The OBA has proven themselves to be incompetent at governing, embroiled in numerous scandals (Jet Gate being the biggest – and still not resolved) and suffering from a huge trust-deficit after reversing on key election promises.  The PLP continues to stumble on from the consequences of its 2012 defeat and, while likely to win an election if called now, doesn’t really seem to have shown that it has learned serious lessons from its defeat.

The PLP in crisis?

One curious aspect of last weeks Annual General Conference (AGC) that has generally escaped attention was that it revealed a party that appears to be in some form of crisis, albeit more of a smouldering crisis than anything else.

You see, in the official statement from the PLP on the leadership vote and the media reporting of the same, it is possible to get an idea of the PLP’s membership statistics.  This can be done by looking at how many votes were involved in deciding the elections of party officers.

In the AGC, at least for the positions of Leader and Deputy Leader, those entitled to vote are the PLP MPs (not the Senators) and Branch Delegates.

The specific formula by which Branch Delegates reflect total PLP membership is set out in the PLP’s Constitution, specifically Clause Five, Section IV, Part B, which states that:

One can also compare the 2014 numbers with the numbers immediately after the 2012 defeat when a special conference, using the same formula for working out voting numbers was used.

In the December 2012 conference there were 17 PLP MPs (Randy Horton and Terry Lister were still full PLP MPs at that time), and a total of 146 votes involved.  Subtract the known number, the 17 MPs, and you arrive at the number of Branch Delegates at the time – 129 Branch Delegates.

Compare that to last weeks AGC where there were 94 votes involved.  We know there were only 15 PLP MPs (as a result of Randy Horton taking up the Speaker position, and Terry Lister going Independent).  So 94 – 15 = 79.  There were only 79 Branch Delegates in October 2014.

If that doesn’t constitute some sort of crisis for the PLP, then what does?

This apparent 39% decline in PLP membership raises a number of questions:

To answer the first question, I imagine there’s no single explanation; rather it’ll be a combination of factors.  One factor may well dominate though.  Without interviewing both the current membership and those who have left about their reasons it’s almost impossible to say.  I imagine doing so should be a priority for the new Leadership.

Some will have left out of a loss to the connection to power.  These were ‘fair-weather members’ who were only interested in PLP membership as long as they could derive some benefit from it, and those benefits were tied to the PLP being in power.  Perhaps they thought membership would be useful for expediting their personal interests, or the PLP could serve as a vehicle for their own ambitions for power and influence.  They were opportunists encrusting the PLP and had no solid allegiance to the PLP’s principles and values.

Some will have left out of ideological reasons.  I certainly tick that box.  The PLP no longer represented the social democratic and socialist values I believe it should have, and I saw no realistic prospects of that changing, whether I was actively involved or not.  I’m sure others had similar concerns about the PLP’s direction (although not necessarily the same ideological concerns as I), and the loss just reinforced that.

Others may have left out of dismay with the post-election Leadership of the PLP, which has to be a concern for the new Leadership, and may well have contributed to the Leadership votes last week.  It seems obvious these disaffected members haven’t gone to the OBA, so there is a chance to recovering them.

As for consequences, this will be seen in the following areas:

What can be done to halt the decline largely depends on the analysis of the cause of the decline.  As stated, this should be a priority for the new Leadership.

It seems clear that this missing 39% of members hasn’t joined the OBA – if anything OBA membership has also declined greatly, especially since Jet Gate and the resignation of Premier Cannonier and Chairman Hollis who appears to have been prevented from fully investigating issues within the OBA.

As such, there is an opportunity for a new political actor to emerge and capture these missing members, from both parties.  These missing members are a signficant resource and could provide the labour power and support base for a 3rd party.

There’s also an opportunity to expedite reforms within the PLP, but this has to be balanced by the loss of internal vibrancy and the risk of a smaller party being captured by special interests, especially if those special interests are able to offer financial resources to compensate for the decline in membership dues.  Ultimately it leads to a less democratic party.

I don’t have space to go into detail about the OBA here, but I think it would be a grave error for OBAers to read the above problems of the PLP in a smug fashion.

They have no room for complacency, and have a whole host of problems of their own.

They’ve already seen the resignations of one Premier and Leader, as well as the Minister of Justice and Chairman over Jet Gate, as well as ongoing questions about other issues which their former Chairman alluded to but was forced to resign before investigating them – and was seen to be hampered in his investigations that he was able to do.

And the lack of contest which saw Mr Dunkley simply coronated exposes a lack of internal democratic vibrancy for their party.

They also have a growing trust deficit having broken key election promises, such as term limits and a referendum on casino gambling, and seem adept at alienating both their opposition and supporters through lack of consultation and clarity.

It seems just a matter of time before the OBA stumbles into yet another scandal or controversy of their own making, and they seem as incompetent a Government as the PLP was thought to have become even in the worst caricatures of their governing.

Sadly, we seem in a dead-end politically with neither party appearing fit to govern at this moment in time, and our economic model continues to stall due to global changes and events.  How do we get out of this situation?

2 thoughts on “Bermudian politics at a dead-end?”