Today, January 4th, marks, for me, the official anniversary of this blog.

While it was actually created I think in December 2006, my first posts were on January 4th, and so I regard that date as the official launch of the site.

It’s been an interesting time.

I took some time to play with some of the stats I have for the blog, in terms of views and posts.

I think there’s a pretty clear positive correlation between posts and views between 2007 and 2011.  The more I posted, and the more regularly, the more my views went up, and as I reduced my blog activity in 2010 and 2011 my views reduced accordingly.

While I’ve begun to steer the blog back into activity, the correlation between posts and views has evidenced a slight negative correlation – although (without doing some more stats work), I think it’s more appropriate to say that readership has remained stable.

The ‘why’ about my reduced activity for 2010 and 2011 are pretty easy to answer.  I was overseas and focused on further studies and working overseas – especially for most of 2010 and 2011 – and, quite frankly, I just didn’t have the time to post regularly.

I reckon that as my posts became less regular and greatly reduced overall (from almost 0.5 a day at the height of activity in 2009 to just 0.07 a day at my least active in 2011) people just stopped viewing the site.  Readers likely assumed my blog was going dormant and gave up checking the site for activity.  Quite frankly, I lost the attention of viewers and dropped out of sight for them subsequently.

A more detailed, month by month comparison of posts to views.

Although I’ve now begun to post more – and more regularly – over the last two years, I haven’t been able to regain those lost readers.  Out of sight out of mind it seems.

In addition to my own (in)activity in 2010-2011, and without reviewing the stats for the other blogs (which I don’t really have access to anyway), I believe that the entire blog-scene also saw a general down-turn at this time.

I can’t really saw definitively why that might be – and it’s only an impression of mine at that, as one would have to spend the time to investigate properly the activity levels of the other blogs at that time too.

It seems reasonable to me to assume that the 2008 economic crash was really beginning to bite at that time.  People were just too pre-occupied trying to survive than to blog – just as I reduced my activity so I could focus on the more important ‘offline’ things of studying and working in a radically different job (from animal trainer to economist), so did people reduce their online blogging too.

I think it’s also reasonable to assume that the rise of online comments in news media, and the growing popularity of Facebook, has also siphoned away the ‘online energy’ that manifested itself in terms of readership for my and others blogs.

Maintaining a blog requires a lot more time and energy than the online news media comments and Facebook pages require.  It’s hard researching and/or putting in the effort to produce regular blog posts with a certain level of quality.  I think a lot of those who previously started blogs soon gave up after a burst of activity, finding the time and energy required to be just too great for the long-term. 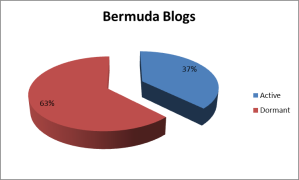 Active to dormant Bermuda blogs as of end of 2013.

Indeed, if we look at my blogroll sidebars, where I’ve divided Bermudian blogs between ‘active’ and ‘dormant’ blogs, which lists all the blogs I’m aware of having existed since my own in 2007, only 37% are classified by me as currently ‘active’ – although I admit I haven’t checked out all of the blogs since a few months back, so even that number may be wrong.

It would also be interesting to see if those blogs going dormant correlate with the economic crisis too, just as I get the impression that overall blogging went on a reduced scale.

So, it seems to me that the Bermudian blogs were hit almost by a double-whammy as a result of the 2008 economic crisis – it became more difficult for bloggers to maintain their sites, and social/news media adapted to the crisis in a way which ‘captured’ much of the online energy the blogs previously captured.

Can this blog rebound?

I think my blog could greatly increase on its current levels of readership, although to do that I would need to maintain, at the very least, my current level of posting activity, while also seeking to ‘advertise’ the site to attract both new and former readers.

I’ve been experimenting with Facebook and Twitter as vehicles for such an ‘advertising’ route, and I recently launched a tumblr site for similar purposes.  I’ve definitely found that the Facebook and Twitter advertising has been useful for attracting readers, with them now eclipsing the traditional route of clicks from other blogs.

I also think that with the rise of social media and news media commenting, I need to adapt the blog with a greater focus on ease of readability and quality of writing/analysis – it needs to adapt so as to complement these innovations and to use them to my advantage.

So, yes, I believe this blog – and others – can rebound, but it is going to require some innovative approaches to advertise the site and it’s going to require dedication in posting regularly and at a certain level of quality.

Now, whether I can realise the above, and thus the ‘rebound’ is another question altogether…